Brachytherapy, or prostate seed implantation, is a type of radiation therapy in which radioactive metallic seeds — smaller than a grain of rice — are permanently placed inside the prostate gland.

This therapy delivers a high dose of radiation directly to the prostate gland and sometimes to the seminal vesicles.

Brachytherapy is given with external radiation, or by itself, depending on the stage of cancer.

How is prostate seed implantation done? 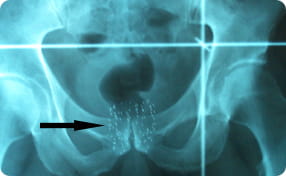 Men with large prostates often undergo a three- to six-month course of hormone therapy to shrink the prostate prior to implantation.

A urologist and radiation oncologist work together to perform the implant.

Prior to implant surgery, you will have a transrectal ultrasound.

The urologist is responsible for the transrectal ultrasound and the radiation oncologist prepares and performs the brachytherapy treatment.

The urologist places a probe in the rectum to locate the prostate gland so that the treatment can be viewed on a monitor.

This five- to 15-minute outpatient procedure uses sound waves to create a video image of the prostate gland and allows the radiation oncologist to:

Next, the radiation oncologist:

The entire procedure lasts about 90 minutes.

The catheter may be left in place for a few days until prostate swelling subsides.

Most men can leave the hospital three to four hours after the implant procedure.

What can I expect after prostate seed implantation surgery?

There is generally little discomfort after the implant, except for some mild soreness in the perineal area, typically lasting for one to two days.

You may experience mild rectal bleeding or spotting, for about 24 hours, in the area where the oncologist inserted the needles. There may be a small amount of blood in your urine.

These side effects are normal and should stop in one to two days.

Your doctor may instruct you to use an antibiotic cream on the surgical site for a few days following surgery.

Between four and six weeks after implant surgery, you will have a follow-up appointment.

It will include x-rays and a CT scan of the pelvis to indicate the positioning of the seeds and help determine the dose of radiation the prostate is receiving.

What are the benefits and side effects of prostate seed implantation?

The radiation can cause side effects, which may last for two to 12 months after the implant and will decrease gradually as the seeds lose their radioactivity.

Side effects, all of which are treatable, may include: