PITTSBURGH – In the time it takes you to read this sentence, every cell in your body suffers some form of DNA damage. Without vigilant repair, cancer would run rampant, and now scientists at the University of Pittsburgh have gotten a glimpse of how one protein in particular keeps DNA damage in check.
According to a study published today in Nature Structural and Molecular Biology, a protein called UV-DDB—which stands for ultraviolet-damaged DNA-binding—is useful beyond safeguarding against the sun. This new evidence points to UV-DDB being a scout for general DNA damage and an overseer of the molecular repair crew that fixes it.
“If you’re going to fix a pothole, you have to find it first. That’s what UV-DDB does. It identifies DNA damage so that another crew can come in and patch and seal it,” said study senior author Bennett Van Houten, Ph.D., professor of pharmacology and chemical biology at the Pitt School of Medicine and UPMC Hillman Cancer Center.
Surveying 3 billion base pairs, packed into a nucleus just a few microns wide, is a tall order, Van Houten said. Not only is it a lot of material to search through, but it’s wound up so tightly that many molecules can’t access it.
Keeping with the pothole analogy, one possible search strategy is to walk along the road, waiting to step in a hole. Another option is to fly around in a helicopter, but since molecules can’t “see,” this approach would require frequently landing to look for rough patches. To get around these shortcomings, UV-DDB combines both search strategies.
“UV-DDB is like a helicopter that can land and then roll for a couple blocks,” Van Houten said. “It also has the ability to find damage buried in chromosomes and help DNA repair molecules go places they otherwise couldn’t, the way a helicopter can navigate really hilly areas.”
When UV-DDB finds damage, it acts like a foreman to help the DNA repair crew get in, fix the faulty bases and detach quickly. 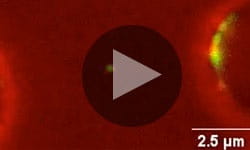 For the first time, Van Houten’s team witnessed this molecular tango along a “tightrope” of DNA slung between two silica beads, using real-time, single-molecule imaging.
“The amazing thing is finding those single molecules in 3D space,” said study coauthor Simon Watkins, Ph.D., director of Pitt’s Center for Biological Imaging. “[Van Houten]’s team has developed an assay that allows them to track the repair enzymes in 3D on the DNA ropes as they repair damage.” 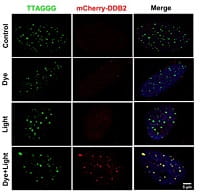 To show that UV-DDB performs the same functions in living cells, Van Houten recruited the help of Marcel Bruchez, Ph.D., of Carnegie Mellon University, and Patricia Opresko, Ph.D., of Pitt. Together they inflicted oxidative damage to the chromosomes’ protective endcaps—called telomeres. As in the DNA tightrope experiment, UV-DDB rushed to the scene, and when it wasn’t available, cells were more sensitive to oxidative stress.
These results help to explain why children born without functional UV-DDB—a rare disease known as xeroderma pigmentosum—are virtually guaranteed to develop skin cancer from sun exposure, Van Houten said. On the other end of the spectrum, cancer patients with higher levels of UV-DDB respond better to therapy.
“It’s clear this protein is involved in a very fundamental problem,” Van Houten said. “We could not have evolved out of the slime if we didn’t have good DNA repair.”
This research was supported by the National Institutes of Health (grants R01ES019566, R01ES028686, R01EB017268, R33ES025606, P30CA047904, R01CA067985, 1ZIAES050158, 1ZIAES050159 and T32GM088119).
Other authors on the study include Sunbok Jang, Ph.D., Namrata Kumar, Muwen Kong, Ph.D., Elise Fouquerel, Ph.D., and Vesna Rapić-Otrin, Ph.D., of Pitt; Emily Beckwitt of Carnegie Mellon; Rajendra Prasad, Ph.D., and Samuel Wilson, M.D., of the National Institute of Environmental Health Sciences; and Cindy Khuu, Chandrima Majumdar, and Sheila David, Ph.D., of the University of California, Davis. VIDEO INFO: