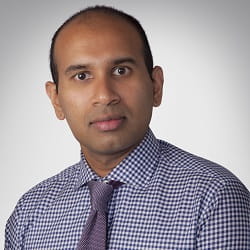 Davar, a medical oncologist and hematologist at UPMC Hillman, also is an assistant professor at the University of Pittsburgh School of Medicine. He focuses on the treatment of advanced melanoma and the development of early phase studies to test new immunotherapeutic approaches. His research has led to national recognition for the development of the first in-human study using fecal microbiota transplants to change the gut microbiome in melanoma patients who were not responding to immunotherapy.

He and his UPMC Hillman colleagues discovered tumor reduction and disease stabilization in almost half of the patients in this early trial. This discovery will lead to expanding the treatment to more patients in larger clinical trials.

The Sy Holzer Endowed Immunotherapy Research Fund, which is provided to emerging leaders in cancer immunotherapy at UPMC Hillman, was established to honor Holzer’s philanthropic work as the long-time president of PNC and his many years of service as chair of UPMC Hillman Cancer Center Council.

“The Holzer award granted to Dr. Davar this year and other cancer researchers at UPMC Hillman in previous years can often be the financial push needed to move early research to the next level, said Robert Ferris, M.D., Ph.D., director of the UPMC Hillman Cancer Center.

The Holzer fund has been supported through leadership gifts made by many local and national individual funds, foundations and corporations. This award, once again, is being matched by the Stanley M. Marks Endowed Research Fund at UPMC Hillman Cancer Center.