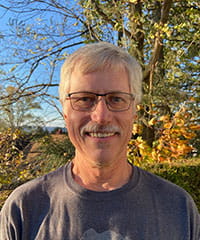 In September 2019, Ed Haberkorn fell asleep in his chair watching a football game. He woke up with a pain in his neck, but didn’t give it much thought — until the next day when his neck felt even more tender.

“I didn’t feel any lumps, but something didn’t feel right,” says the retired industrial arts teacher.

The Johnstown resident immediately made an appointment with a local ear, nose, and throat (ENT) doctor, who ordered a CAT scan. After detecting a suspicious growth, she referred him to Umamaheswar Duvvuri, MD, PhD, an otolaryngologist and head and neck surgeon at UPMC Hillman Cancer Center and UPMC Presbyterian.

Dr. Duvvuri performed an endoscopy and biopsied lymph nodes. The tests confirmed Ed had a squamous cell carcinoma on the base of his tongue caused by the human papilloma virus. He recommended surgery along with radiation and immunotherapy.

“I was taken aback,” Ed says. “It was overwhelming.”

But Ed put his trust in the team of specialists at UPMC Hillman Cancer Center. Dr. Duvvuri, who directs its robotic surgery program, is a specialist in transoral robotic surgery (TORS) — a minimally invasive procedure used to treat complex head and neck disorders. In November 2019, Dr. Duvvuri used the sophisticated TORS procedure to remove the tumor along with 31 lymph nodes and the jugular vein on the right side of Ed’s neck. Three days after the 8-hour procedure, Ed was back home in Johnstown.

“The UPMC Hillman team is a well-oiled machine,” says Ed. “The doctors, nurses, and technicians care about their patients and they know what they are doing. Everyone was quick to respond by email, texts, or phone calls if I had a question or concern.”

Ed also benefited from the support of the UPMC Head and Neck Cancer Survivorship Clinic. In addition to helping to coordinate his care, various specialists helped him manage the side effects of cancer treatment.

A speech therapist worked with him on swallowing issues and swelling in his throat. A dietitian provided food samples and diet suggestions. A dentist performed a specialized dental procedure. And a lymphedema therapist taught Ed and his wife how to manage fluid buildup in his neck.

“The program was a great asset,” says Ed. “They know about the side effects and how to address them. I would have never known what to do without their help.”

A year after his cancer diagnosis, Ed was enjoying a return to his active lifestyle — including golfing, fishing, and hunting — and looking forward to playing ice hockey again. “I’m pretty much back and I’m feeling good,” says the 69-year-old grandfather of three.

Although Ed’s treatments have ended, he will return for regular follow-up visits over the next five years. If there is no recurrence of cancer, he will be considered cured. “I feel very fortunate,” says Ed. “I was in great hands at UPMC Hillman. My experience there was very positive.”

Ed's treatment and results may not be representative of similar cases.